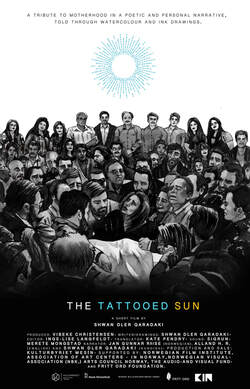 Welcome to the premiere of the short documentary "The Tattooed Sun" 25 march 2020 at the Cinemateket - Oslo.

We have a limited amount of seats. Book your free ticket here: https://www.cinemateket.no/filmer/den-tatoverte-solen

The short documentary "The Tattooed Sun" is an intimate portrait of filmmaker Shwan Dler Qaradaki's late mother. At some point in our lives, most of us experience the death of the person who once gave us life - our own mother. What thoughts and perspectives do we have in such a situation? Equipped with time, a unique voice and a personal perspective, artist and filmmaker Shwan Dler Qaradaki takes us on a journey into the life of an extraordinary woman. A journey that includes births and wars in a world of dramatic change, with sorrow, loss, admiration and gratitude. He manages to make the personal universal - something we can all relate to, telling the story through watercolour and ink drawings, with a subjective narrative voice.
Director & Writer: Shwan Dler Qaradaki
Drawings: Shwan Dler Qaradaki
Voice: Jan Gunnar Røise (norwegian), Alland H. R. (english) and Shwan D. Qaradaki (kurdish)
Editors: Inge-Lise Langfeldt
Translator: Kate Pendry
Music: Foad Karim Ali, HOC Music, Ibrahim Najmadin, Nils Økland & Abdulla Karimi
Sound: Merette Mognstads studio
Camera: Ranj Hussein
Financing: Norwegian Film Institute, Association of Art Centers In Norway, Norwegian Visual Association (NBK,) Arts Council Norway and Fritt Ord
Produced by: Vibeke Christensen at Kulturbyåret Mesen


The Tattooed Sun
​
Twenty years ago Shwan Dler Qaradaki fled from Kurdistan. But not until his mother died, many years later, did he really feel the dread of being without a home. This is at the core of his new film, The Tattooed Sun.
Text: Oda Bhar

What is a home, if not an embrace? In The Tattooed Sun, Shwan Dler Qaradaki describes the time around his mother’s death in 2015, when he seriously started to question the nature of attachment. Why did his bond to Kurdistan feel so weakened after his mother passed away? What kind of a parent did he himself wish to be?

Warm and tough
The story is told in the filmmaker’s expressive watercolour paintings, accompanied by a subjective voiceover. His mother comes across as a strong Kurdish woman, who remained the centre of the family through difficult times of war and conflict. She grew up in poverty, was illiterate, and had ten children. One son disappeared at war, another one died of cancer, and the filmmaker himself feels guilty for having left the country.
In his drawings the mother is pictured as sturdy and tough, with a shimmering depth in her eyes that indicate both joy and reflection. She wears a dark shawl on her head, holding a cigarette nonchalantly in her tattooed hand. The title refers to another tattoo on her chin, a stylized sun, that may also be interpreted as a symbol of inner light and warmth. Only once do we get to see her in a live action scene, dancing with her adult children in an amateur video. Though her birth date is unknown, the family had suddenly decided it was time to celebrate her seventieth birthday. In this shot she is chubby and tall, her black hair falling softly on her shoulders, and her eyes moving happily from one relative to another.

Relatable pain
Using personal memories to touch upon the universal, is something Shwan Dler Qaradaki has mastered through many films. Working with the refugee experience and post-traumatic stress may require the articulation of rage and despair, but also glimpses of comfort and hope. The watercolour paintings are seldom animated, but instead left quietly gliding across the screen, like frozen moments in time. Occasional movement comes from family videos and landscape shots, like the blue tramway of Oslo or a children’s playground. One drawing shows the mother carrying a heavy load, while a tiny aircraft is crossing the sky far above her head – a symbol of the distance between Norway and Kurdistan.
What impresses me the most is how easily relatable the protagonist’ yearning is, even for someone who has never had to leave their country of birth. Through subtle means we are made to empathize, not only with the son’s feelings, but with the distant call of a mother. The Tattooed Sun is a film about the bond between mother and child, and what happens when it is ultimately severed, not by geographical absence, but existentially, by death. To be orphaned as an adult may make homesickness seem less about geography or culture, and more about the reality of a human embrace. At the core of the story lies the shock of absence, but also a lost connection to home.

Grief and hope
Qaradaki is keen to emphasize that his mother was far from the stereotypically oppressed Muslim woman. Nevertheless, he seems upset on her behalf, because she had to live her entire life in a male-dominated society. He states that when a woman is considered the property of a man, he will get the credit for whatever she achieves. However strong, even his mother would have had to obey her husband. But was she a victim? The film portrays her as anything but. On the contrary, she is referred to as the family chief.
Towards the end of the film we accompany her son to Kurdistan, where he is sitting for days by her death bed. When the mother's heart stops, time holds its breath. The son is close to an anxiety attack, when he tries to feel her pulse, but only hears his own. His self-portrait stares at us from the screen, eyes rounded by horror. He cries at her funeral, not only from grief, but from a feeling of guilt. It is the simple, banal guilt of not having obeyed her wish to come home earlier. Her pain is only lately becoming clear to him, after he himself became a father. Finally, he cries for himself, and the new loneliness he feels.
But in the end life goes on. And there is still much to hope for.